Whilst 2013 had been a relatively warm and sunny year for the “Wildlife Garden Balcony” , 2014 could best be described as more of a “mixed bag” –  meteorologicaly speaking.  Nevertheless , the balcony continued  to attract and sustain a wide variety of wildlife. Here are few photographic highlights taken over the year :

I’d also introduced this beautiful  Purple Angelica  for the first time to the balcony this year and was equally impressed by it’s ability to attract pollinating insects as I was by its magnificent crimson flowers. It’s glistening, nectar rich florets became a magnet for Bees, Hoverflies and, as can be seen in the photo, Common Wasps. Whilst Wasps are, understandably, unpopular with many people, they actually serve a very important role in the ecosystem: they are great pollinators and also feed on caterpillars, aphids and other common garden “pests”

My Dustbin Lid Meadow continued to evolve and change with Red Clover dominating the mini meadow over 2014’s summer months. The Clover helps to fertilise the meadow naturally, providing nitrogen to the soil through its roots.  The flowers are also a fantastic source of nectar for pollinating insects , such as this Small Skipper Butterfly which can be seen just centre right in the photo 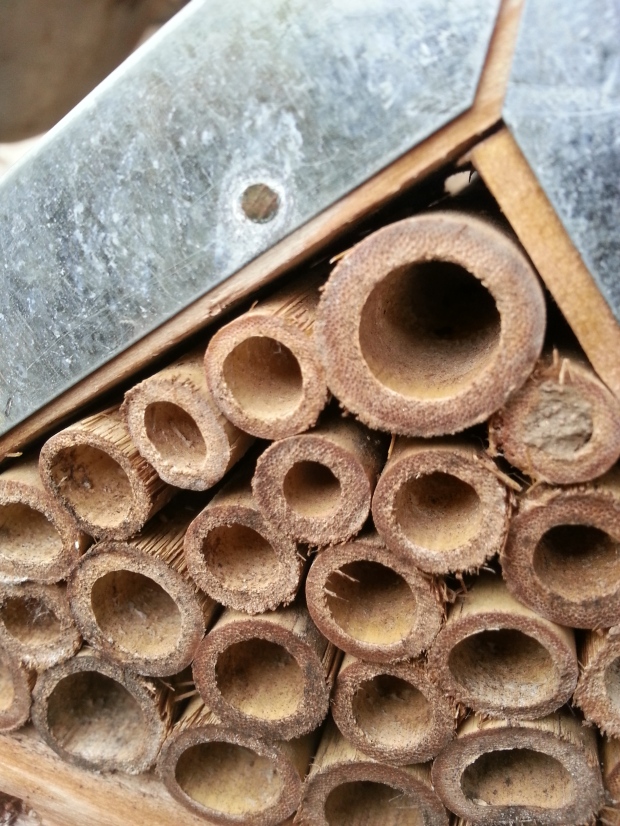 My newly acquired “Bug Hotel” quickly became a home for solitary wasps: If you look at the top right hand corner, you can see that a Inchuimid or potter wasp has sealed the opening with a plug of clay. It does this after capturing a caterpillar which it then deposits inside the cane and lays an egg on it. It then seals the opening with the clay and makes its departure. Once the egg eventually hatches, the emerging larvae has a “ready made” meal in the form of the poor caterpillar.  “Insect Hotels” or “Bug Houses” are an excellent habitat for bees, ladybirds, hoverfiles and countless other insects which use them for nesting and for hibernation. Most garden centres sell them ready made or they can be bought online. Alternatively,  it’s also very easy to build your own (using cut bamboo canes) and can be as simple or as elaborate as you wish. Here are a few great examples

Robber Fly (aka the “assassin fly”) eating a parasitic wasp. This ruthlessly efficient predator hunts and eats a wide variety other insects.   Wikipedia says of it:

In general the family attacks a very wide range of prey, including other flies, beetles, butterflies and moths, various bees, ants, dragon and damselflies, ichneumon wasps, grasshoppers, and some spiders. They do so apparently irrespective of any repugnatorial chemicals the prey may have at its disposal.[5]

Many when attacked in turn do not hesitate to defend themselves with their proboscides and may deliver intensely painful bites if handled incautiously.

The antennae are short, 3-segmented, and sometimes bear a bristle-like structure called an arista. The fly attacks its prey by stabbing it with its short, strong proboscis injecting the victim with saliva containing neurotoxic and proteolytic enzymes which very rapidly paralyze the victim and soon digest the insides; the fly then sucks the liquefied material through the proboscis.

The life histories are poorly known. Larvae generally seem to live in soil, rotting wood, leaf mould and similar materials, some being predatory and others detrivorous.[5]

This Sailor Beetle (a member of the soldier beetle family) was seen for the very first time on my balcony in 2014. Whilst the adults are often found feeding on the nectar from umbelliferous flowers (such fennel, yarrow, sweet cicely and angelica) their larvae are known to hunt out snails and slugs….making them another gardeners “best friend”

I was also delighted to see , and for the very first time on the balcony, this exotic looking Ruby Tailed Wasp. It was found lurking around the “bug hotel” , undoubtedly waiting to lay its eggs in the cell of some unsuspecting solitary bee or wasp which had taken up residence in the “bug hotel”.  The Wildlife Trusts Website explains;

The glittering, metallic Ruby-tailed Wasp is one of many species of solitary bee and wasp that can be spotted in a number of habitats from walls to sandy quarries, rocky outcrops to tree trunks. These insects do not live in colonies like Honey Bees; instead the female builds a nest by herself, stocks it with pollen and lays an egg within each cell she has created. However, the adults of the Ruby-tailed Wasp are a little lazier: the females actually lay their eggs in the nests of other solitary bees and wasps, especially Mason Bees. When the eggs hatch, they eat the larvae of the Mason Bees and develop – this gives the Ruby-tailed Wasp its other name of ‘Cuckoo Wasp’ 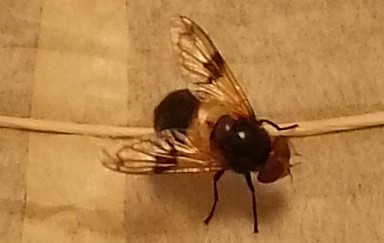 This Great Pied Hoverfly (volucella pellucens) flew in from the balcony one evening and landed on my lampshade, apparently attracted by the light.  Like all hoverflys, they are completely harmless to us and only mimic the appearance of bees and wasps in order to deter predators from eating them

This delightful Small Skipper Butterfly , spotted for the first time on my balcony,  can be seen sipping nectar from the equally colourful Purple Toadflax. Although the Toadflax is somewhat invasive it really “earns its keep” on the balcony with its very long flowering period and copious supplies of nectar for bees and butterflies alike. 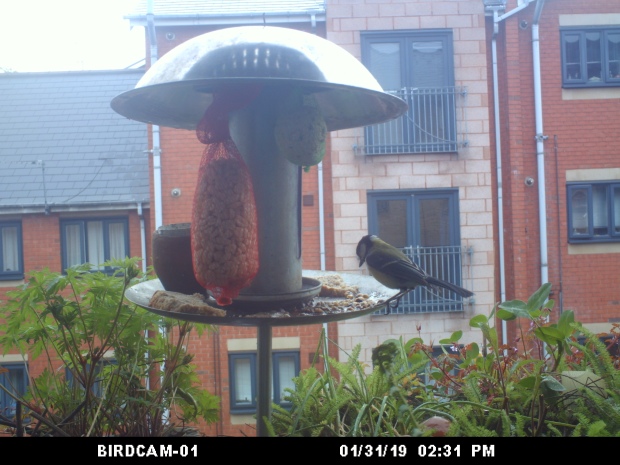 Of course, it wasn’t just insects which benefited from the Wildlife Garden Balcony in 2014. Blue Tits, Coal Tits and , as seen above,  Great Tits were regular visitors to my home made birdfeeder and whose images were captured on my Birdcam.  Unfortunately, as  you can see from the above photo, the Birdcam camera seems to have developed a fault with the date and time display and which has proven impossible to fix – unless of course, it really is 2019?  So, if the nice folks at Wingscapes (who make the Birdcam ) want to exploit the excellent promotional opportunities afforded by my blog site, then please feel free to send me a replacement Birdcam. And yes, this really is a shameless blag for a freebie 😉 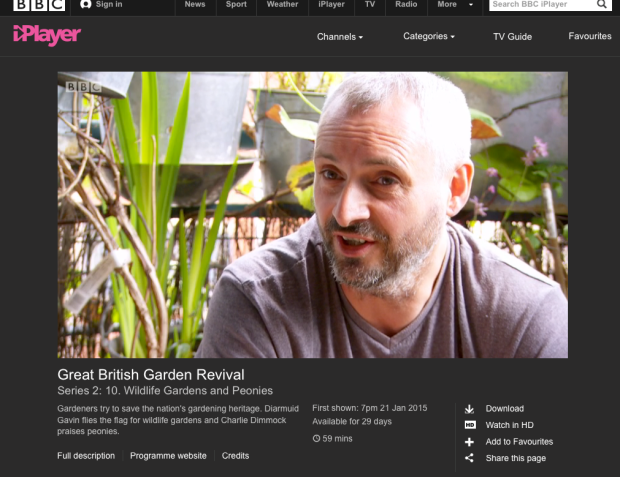 In  the early part of 2014, researchers wanting  to film an episode about wildlife gardens for the BBC’s The Great British Garden Revival contacted me and asked if they could come and film my balcony! As the whole point of this blog is to encourage and inspire other people to create wildlife balcony gardens of their own, I obviously said YES!

So, in June a camera crew descended on my flat and filmed part of the episode which was eventually broadcast on BBC 2 on the 21st January  –  the following year. To see it,  just follow the iplayer link HERE. The balcony makes an appearance 27 mins and 30 secs into the episode. Following the broadcast , I had lots of enthusiastic twitter mentions from people feeling really inspired to create their own mini-wildlife gardens as well as hundreds of hits on this blog site.  What a great end to 2014 and a fantastic beginning to 2015 for the Wildlife Garden Balcony!