Which plants to use (part 1) – Spring Plants

So. I’d prepared my planters (mainly buckets), filled them up with peat free compost (to which I’d also mixed in a slow release, organic fertiliser) and was now ready to plant them up.  But which plants was I going to choose? 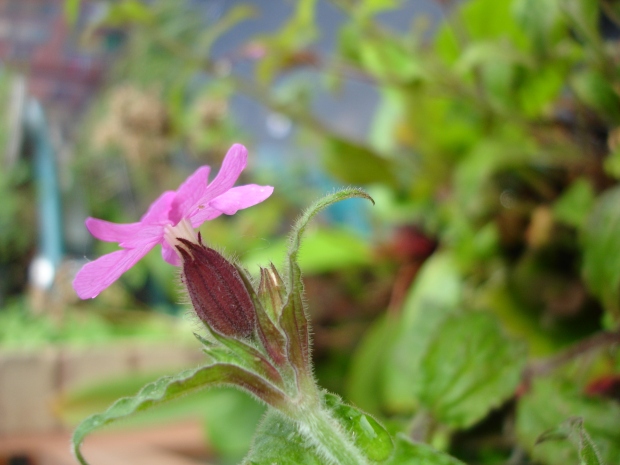 As much as possible, I opted to choose native species plants – such as this Red Campion – as our native creatures have evolved alongside them and adapted to using them as a source of food. This Red Campion is a native woodland wild-flower and is tolerant of sun or shade.It bloomed from spring into late summer,attracting both bees and butterflies,and is definitely a good choice for my balcony garden

Given that my balcony was so small, I wanted to ensure that any plants I chose to use really  “earned their keep” and so provided maximum value for the wildlife I was hoping to attract. Ideally, I wanted each plant, as far as possible, to provide both nectar and pollen for the insects, seeds or berries for birds as well as leaves which were edible to a range of caterpillars and insects. I also wanted to introduce some evergreen plants(such as ivy) which could offer shelter to insects hibernating in the winter and, if lucky, also provide nesting sites for birds. 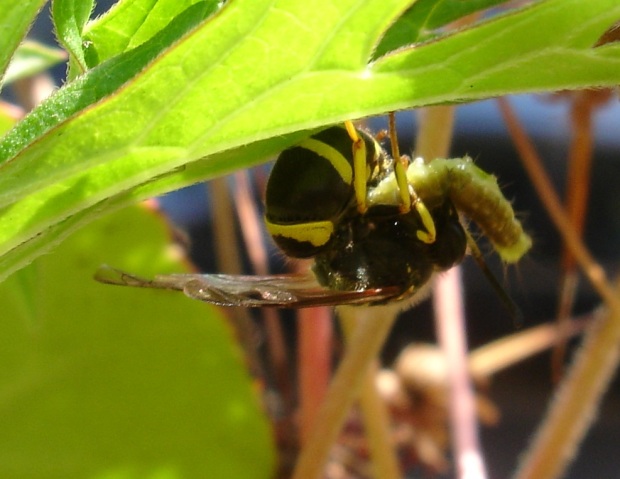 This “Potter Wasp” has  just caught a tiny caterpillar for lunch. The unfortunate caterpillar  had just been feeding on the leaves of my native “Meadow Cranesbill,” where it had created a little cocoon for its self. I watched as the wasp carefully probed and nibbled at the rolled up leaf, where the caterpillar was cocooned , until it eventually managed to extract it. This illustrates my earlier point about using native wild flowers, wherever possible , as the leaves are often a food source for many of our native insects which in turn become the food of other creatures higher up the food-chain ( as can be seen above). In this case, its not only the leaves of the meadow cranesbill which support insects but also its purple blue flowers – which have been a magnet for nectar hungry bumblebees visiting the balcony

As the balcony was east facing, I knew I would only be getting direct sunshine for around 4 hours a day in high summer, so I wasn’t entirely sure if I‘d get away with plants which demanded a great deal of direct sunshine.

In the end, I decided that the best approach was to prioritise plants which offered the “maximum benefit” to wildlife and to just take a chance with any of the sun loving plants I selected.

As it happened,  pretty much all of the sun loving plants coped just fine with the east facing aspect, including the traditionally  “sun hungry” herbs.

So, here are the “Star Performers” which I’d eventually selected and which I’ve  listed in order of their “seasonal contribution” to wildlife :

The “Spring Bucket”  in March.  Attracting  bees with the abundant nectar provided  by the mixture of dwarf daffodils and grape hyacinths which can be seen in flower, here.

Spring:  Bulbs such as Dwarf Daffodils, Snowdrops, Grape Hyacinths and Crocuses. All of these are some of the very first plants to flower, in early spring,  and offered  butterflies, bees  and other insects vital sources of nectar and pollen after emerging  from their long winter slumbers.

With this in mind, I planted up a nectar rich “Spring Bucket” in to which I  planted a selection of these spring flowering bulbs including dwarf daffodils,  snowdrops ,  crocuses and  grape hyacinths along with a few early summer Purple Flowering Alliums Together, they provided a rich source of nectar and pollen, as they flowered in succession throughout early March to early June. Once they’d all finished flowering and the bulbs’ leaves had started to die back, I planted some “wildlife friendly” annuals into the emerging spaces. These included cosmos (providing nectar for bees, butterflies and hoverflies as well as seeds for birds) and nasturtiums  (providing nectar and pollen for bees as well as a food plant for the caterpillars of the small and large white butterflies)

Other good spring/early summer plants included the native Cuckoo Flower (cardamine pratensis) which is the food-plant for the orange tip butterfly as well as bi-annuals such as Honesty and the native Garlic Mustard – which are both good sources of nectar as well as food plants for the “orange tip” and “white” butterfly species.

Of course, this is not by any means a definitive list  of “wildlife  friendly” plants and will be updating these pages with details of other suitable plants (wildlife magnets!) as my blog develops. Watch this space!

NEXT: Choosing “wildlife friendly” plants for the summer

5 thoughts on “Which plants to use (part 1) – Spring Plants”